Uganda’s disaster risk management capabilities and disaster resilience were put to the test in the first half of the year 2020. Uganda is a signatory to the Sendai Framework for Disaster Risk Reduction (SFDRR) (2015-2030) and has been steadily implementing measures to realise the key tenets of the SFDRR and promote a disaster resilient society. Uganda is prone to disasters due to its physical environment and the vulnerability of its population, but the number of hazards experienced between February and May 2020 was unprecedented, stretching ecological and social systems to their limits. These included the worst locust infestation in 70 years, record floods, and landslides, all occurring alongside the COVID-19 pandemic. The joint effects of flooding and COVID-19 were particularly severe in the Kasese District.

Kasese District is located in Western Uganda, and has a complex mixture of social and ecological vulnerabilities. As a mountainous region proximate to the African Rift it is prone to landslide and earthquake hazards, whilst the surrounding lowlands are also susceptible to flooding. Kasese District has one of the highest population densities in Uganda, and some of the most vulnerable populations.. Disaster risk issues therefore are prominent in this district in general, and particularly in the flood-prone lowlands. 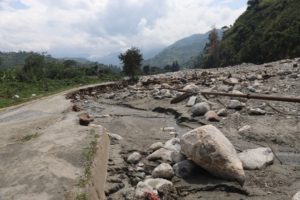 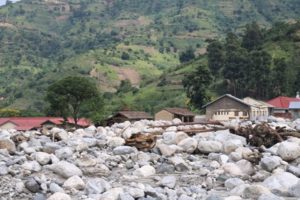 School destroyed by the flood event

On the 8th of May 2020, at the peak of the COVID-19 lockdown measures implemented by Government of Uganda, severe floods impacted the Kasese District. This was followed by a recurrence of flooding just two days later. The flooding resulted in massive destruction to property including roads, bridges, schools and hospitals. Approximately 1,700 households or 9,000 people were displaced. 49,000 people were estimated to be flood affected. Fortunately, there were no fatalities recorded directly from the flood event, despite it occurring at night and requiring immediate evacuation of the lowlands. The timing of the flood event also meant that COVID-19 measures could not practically be implemented in the improvised shelter settings that accommodated evacuees.

It is notable that Kasese District had experienced a previous disastrous flood in 2013, and major infrastructure including roads, bridges and gabions had been reconstructed afterwards. Despite this reconstruction effort the impact of the 2020 flood was reportedly worse than the 2013 flood. This suggests that the ‘Building Back Better (BBB)’ principles, as envisioned under the SFDRR, were not realised. Secondly, any future recovery and reconstruction must take into consideration the co-occurrence of natural hazards with biohazards such as COVID-19 or Ebola, in order to enhance disaster resilience. Lastly this event did see some positive developments, particularly the increased participation of the private sector throughout the disaster response.

COVID-19 in The Netherlands: Both a Biological Disaster and an Economic Disaster By: Mr Jos Bal, ADN’s Knowledge Exchange Officer The coronavirus (COVID-19) is still spreading globally. Currently, in the world, there have been almost 5 million confirmed COVID-19 cases…
END_OF_DOCUMENT_TOKEN_TO_BE_REPLACED

Belize COVID-19 Update By: Daniel Mendez COVID-19 continues to cause major health, economic, social and psychological impacts across the Americas. As of 10 May 2020, there were 1,702,451 confirmed cases, with 101,874 reported deaths (PAHO, 2020). In the Central American…
END_OF_DOCUMENT_TOKEN_TO_BE_REPLACED

Challenges for the New World By: ADN’s Junior Champion, Arkoneil Ghosh COVID-19 doesn’t seem to be controllable and we are learning to get ourselves prepared to survive in this new world. The news of Bollywood stars being tested positive doesn’t…
END_OF_DOCUMENT_TOKEN_TO_BE_REPLACED

A Reflection on My PhD Fieldwork Experience Kalimpong district, India By: Peter McGowran   Last year I took on a short-term administrator role with the ADN. Since May 2019 when the role officially finished, I have undertaken my PhD fieldwork in Kalimpong…
END_OF_DOCUMENT_TOKEN_TO_BE_REPLACED

Reflective Short Piece on the Situation in India: From Coronavirus to Locust Attack to Cyclones   By: ADN’s Junior Champion, Arkoneil Ghosh   “While India as a nation continues to fight Coronavirus, here comes the Locust attack, which has destroyed…
END_OF_DOCUMENT_TOKEN_TO_BE_REPLACED