School Pupils in Osaka are Champions for Avoidable Deaths from Tsunamis

School Pupils in Osaka are Champions for Avoidable Deaths from Tsunamis

The city of Izumiotsu, located in the central part of Osaka Prefecture, Japan, is a relatively small city with approximately 75,000 habitants. The city used to be famous for its blanket industries, but now most companies have moved their factories overseas. At one point, 90% of Japanese blankets were produced in Izumiotsu. The former blanket factories have now turned into apartment buildings, which have brought more residents from outside of the city. The location of the city is between Kansai International Airport and the city centre of Osaka. The residents can easily commute to the Osaka’s city centre from Izumiotsu.

Izumiotsu is also located along a coastline. It used to be a beach, but now it is a quay that serves as an important port for the Kansai region. From this port, it is possible to take a huge ferry boat to Kyushu island. The sea brings a nice view to the residents of Izumiotsu. However, the sea has also brought on tsunamis.

Central and local governments have revisited the tsunami prediction and have also recalculated damage from the tsunami after the 2011 triple disaster. The earthquake predication indicated that the worst case scenario would result in more than 2,000 deaths due to the tsunami. However, the prediction also indicated that if the people prepared for the tsunami, then no one would die. This means that there would be enough time for an evacuation between the predicted earthquake and the tsunami. Quick evacuation is essential for the residents.

To disseminate this important information to the residents in the city, the school pupils of Hama elementary school rose up in 2013. The 5th-grade pupils (10-11 years old) are implementing tsunami disaster risk reduction (DRR) with ADN President, Dr Hideyuki Shiroshita. This included making a video programme about ‘Tsunami DRR’, publishing a Tsunami DRR newspaper for the residents, and running mock drill for tsunamis (please see the pictures below). The implementation by the pupils has been acknowledged by the mayor of Izumiotsu; the mayor introduced the great achievements by the pupils to the experts at the disaster prevention council of the city.

This year the pupils are developing a ‘Tsunami AR (Augmented Reality)’ that enables the residents to learn what will happen when a tsunami occurs at their location. They believe that their continuous efforts will reduce avoidable deaths from tsunamis. 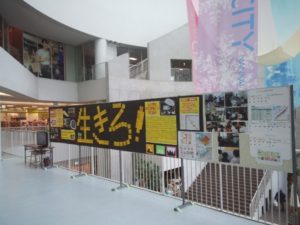 The video programme about ‘Tsunami DRR’ was shown at a shopping centre in the city. The text in yellow Japanese reads: ‘To survive!’ 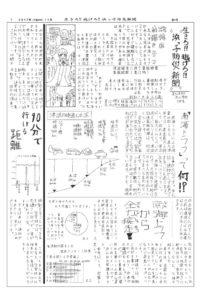 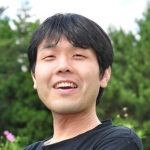 Dr Hideyuki Shiroshita is an Associate Professor at Graduate School and Faculty of Societal Safety Sciences, Kansai University in Japan. He is also an affiliate member of the Disaster and Development Network (DDN) at Northumbria University, UK. His research interests are in the areas of disaster education, risk communication and Science, Technology and Society (STS). To overcome the conventional disaster education, which involves one-way knowledge transmission from experts on disaster risk reduction (DRR) to non-experts, the definition of disaster education is revisited from both DRR and pedagogical perspectives. He has also been served as an advisor of disaster education to several governmental committees. Currently, he is the chairperson of Osaka Prefectural committee for promoting safety and disaster education. Dr Shiroshita and Dr Nibedita S. Ray-Bennett jointly established ADN, and they contributed an ‘Input Paper on Avoidable Deaths’ to the UN’s Global Assessment Report 2019 on DRR.

COVID-19 in The Netherlands: Both a Biological Disaster and an Economic Disaster By: Mr Jos Bal, ADN’s Knowledge Exchange Officer The coronavirus (COVID-19) is still spreading globally. Currently, in the world, there have been almost 5 million confirmed COVID-19 cases…
END_OF_DOCUMENT_TOKEN_TO_BE_REPLACED

Belize COVID-19 Update By: Daniel Mendez COVID-19 continues to cause major health, economic, social and psychological impacts across the Americas. As of 10 May 2020, there were 1,702,451 confirmed cases, with 101,874 reported deaths (PAHO, 2020). In the Central American…
END_OF_DOCUMENT_TOKEN_TO_BE_REPLACED

Challenges for the New World By: ADN’s Junior Champion, Arkoneil Ghosh COVID-19 doesn’t seem to be controllable and we are learning to get ourselves prepared to survive in this new world. The news of Bollywood stars being tested positive doesn’t…
END_OF_DOCUMENT_TOKEN_TO_BE_REPLACED

A Reflection on My PhD Fieldwork Experience Kalimpong district, India By: Peter McGowran   Last year I took on a short-term administrator role with the ADN. Since May 2019 when the role officially finished, I have undertaken my PhD fieldwork in Kalimpong…
END_OF_DOCUMENT_TOKEN_TO_BE_REPLACED

Reflective Short Piece on the Situation in India: From Coronavirus to Locust Attack to Cyclones   By: ADN’s Junior Champion, Arkoneil Ghosh   “While India as a nation continues to fight Coronavirus, here comes the Locust attack, which has destroyed…
END_OF_DOCUMENT_TOKEN_TO_BE_REPLACED