Belize, located in both Central America and the Caribbean, has not escaped unscathed as the virus continues its spread in the region. The country has confirmed 18 cases and fortunately, only two deaths. As of 11 May, there were no active cases, 16 persons have recovered and there have been two deaths (Belize Ministry of Health, 2020). 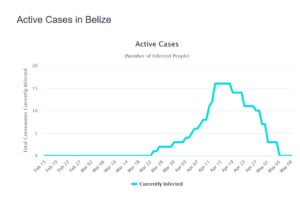 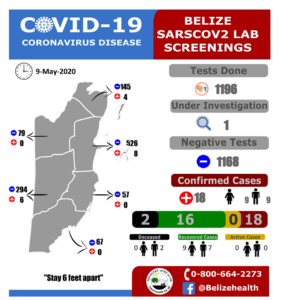 Although the Ministry of Health has not yet provided any analysis on Belize’s low numbers, it can be inferred that the steps that were taken several weeks ago have been effective. The first case was reported on the 23rd of March, but several steps had already been taken weeks before. These included:

When the first case was reported on the island of San Pedro, the Government then declared a State of Emergency and announced a 14-day quarantine on the island, embarked on contact tracing and began testing. As further cases were reported, the Government added further layers of measures within the affected communities, as well as nationally. On the 25th of March, it was announced that: people had to form a line to access services and maintain a distance of at least 3 feet between each other; social gatherings were limited to no more than 10 people; and that individuals who are ill and are exhibiting flu-like symptoms are to refrain from accessing services in person.

On 1 April, the Government of Belize declared a nationwide state of emergency for 30 days and implemented a curfew from 20:00 to 05:00 and imposed a lockdown intended to dissuade people from leaving their homes except for specific reasons. These specific reasons included buying essential goods, attending medical appointments or to work in essential services. Police were given power to stop and question anyone who was moving around during the curfew and arrest anyone violating the orders. Belize closed its terrestrial and marine borders with Mexico and Guatemala and closed the Philip S.W. Goldson International Airport to all flights except for cargo. The last time a nationwide state of emergency was declared was in 1981, in response to major social unrest surrounding the independence movement.

As the numbers in Belize have decreased to 0, the general sentiment of the people seems to be acceptance that the measures need to continue, albeit the need to open the country’s suffering economy. From my perspective, the Government has been doing a very good job at crisis communications, broadcasting a daily information session called “Ask the Experts”, providing daily COVID-19 updates from the Ministry of Health and hosting regular Prime Minister press conferences. The extension of the state of emergency allows the government to slowly open the country in a measured and careful manner. This is very important given the high numbers of cases among our immediate neighbours – Mexico, Guatemala and Honduras. At this point, the government needs to ensure that it balances the need to protect the damaged economy and the affected sectors (e.g. tourism, agriculture and production) with the need to prevent any future infections in the country. Belize has successfully controlled the spread of COVID-19 but now needs to look to the medium and long-term recovery of the country.

PAHO (2020) ‘Cumulative confirmed and probable COVID-19 cases reported by countries and territories in the Americas, as of 28 April 2020 Updated as of 2PM’, available online at: https://ais.paho.org/phip/viz/COVID19Table.asp, accessed April 29, 2020.

COVID-19 in The Netherlands: Both a Biological Disaster and an Economic Disaster By: Mr Jos Bal, ADN’s Knowledge Exchange Officer The coronavirus (COVID-19) is still spreading globally. Currently, in the world, there have been almost 5 million confirmed COVID-19 cases…
END_OF_DOCUMENT_TOKEN_TO_BE_REPLACED

Challenges for the New World By: ADN’s Junior Champion, Arkoneil Ghosh COVID-19 doesn’t seem to be controllable and we are learning to get ourselves prepared to survive in this new world. The news of Bollywood stars being tested positive doesn’t…
END_OF_DOCUMENT_TOKEN_TO_BE_REPLACED

A Reflection on My PhD Fieldwork Experience Kalimpong district, India By: Peter McGowran   Last year I took on a short-term administrator role with the ADN. Since May 2019 when the role officially finished, I have undertaken my PhD fieldwork in Kalimpong…
END_OF_DOCUMENT_TOKEN_TO_BE_REPLACED

Reflective Short Piece on the Situation in India: From Coronavirus to Locust Attack to Cyclones   By: ADN’s Junior Champion, Arkoneil Ghosh   “While India as a nation continues to fight Coronavirus, here comes the Locust attack, which has destroyed…
END_OF_DOCUMENT_TOKEN_TO_BE_REPLACED